I am a Star Wars Fan

Thursday is the release of the final film in the Star Wars Universe. To celebrate this event I am sending to you my friends and family this email. I may be an adult but the minute I see the words “Star Wars” pop up on the screen I’m 5 years old again.

I am a Star Wars Fan.

* I have the old toys and I buy the new toys which makes Jenni roll her eyes.
* I have toys on my desk.
* My yahoo sound is a wookiee roar when ever I get a message.
* I own every version of the film in letter box.
* I play Star Wars Galaxies online.(I’m Gomi “The Dirty Smuggler”)
* I can quote the film line for line as it’s playing. Jenni hates that 🙂
* Ever since 1978 I have received at least one gift for either my birthday or Christmas that was Star Wars related.
* I have yet to lose a game of Star Wars Trivial Pursuit. (Nice try last time Gina. Phillip you are close but you underestimate the power of the Dark Side)
* I use the phrase “May the Force be with you” and have rubbed off on my co-workers (David, Susan This means you)
* I own a copy of the Star Wars Holiday Special

For those who knew me as a kid you know exactly how much I love these films. Attached is a pic of me from 78, Spiderman underoos and a Han Solo Pistol (Blastech DL-44 to be exact)

Thanks to Mom and Dad for putting up with me and my obsession and also getting me all of those wonderful toys. I know it had to be aggravating with me trying to convince you that I needed more than one stormtrooper. I still say that 20 wasn’t enough.

Mike, a HUGE thank you for getting me into the sneak preview. I owe you bro. I have already purchased tickets for Wednesdays midnight showing and from 10AM to Midnight for Thursday.

I blame it all on my Aunt Bobbie for taking me to see the original movie back in 1977. Thanks. I think Mom and Dad are still kinda aggravated with you about it.

Thanks to all of you who got me the gifts over the years. I’ll never forget what my cousin told his wife when she got my name for Christmas. “Just buy him something with Star Wars on it and he will be happy”. Truer words were never spoke.

Thank you to my sister for not getting mad when I buy my niece and nephew Star Wars toys. You know I love the fact that they will watch the movies with me. One of the happiest days of my life was when my niece was about 3 and she told me she wanted to watch Star Wars. About a week ago my nephew told me he wants to watch them with me. I’m such a bad influence. <grin>

Thanks to my buddies Phillip and Big David for having the discussions about the movies. And Big D I got some more of the EU books for you. Phillip I got you a ticket for Wednesday night and for Thursday. I know you’ll hang with me all day.

To the friends I made in-game, Cukova, Esu, Sett’bacca, Taavo, Ta’luna…etc. Thanks for helping me immerse myself into the game.

And finally Thank you to Jenni for putting up with me buying or at least trying to buy everything Star Wars related. For those of you that don’t know she keeps explaining to me that buying all of it at once is not a good idea. She keeps saying something about delayed gratification but I don’t believe her. I love you.

This is an article from February of 97

By 11:35 a.m. Friday, Wyatt Fuller had bought tickets to all five shows that day at Evans 12 Cinemas to see the revamped version of Star Wars, which reopened this weekend on the big screen.

“I want to see how many times I can see it in a day,” said Mr. Fuller, who skipped work Friday to see the flick multiple times. He plans to return today and Sunday to the theater for more of the same.

“I’m a freak,” said the 25-year-old about his Star Wars affection, claiming to have seen the blockbuster more than 100 times. His personal checks even depict scenes from the movie.

“We’ve been anticipating this for two years when we heard they were redoing it,” said David Bauer, 21, who was at the 11:45 a.m. showing at Evans 12 with his girlfriend Elizabeth Brizius.

By 11:30 a.m., the line was 50 deep with excited first-time and multiple-time big-screen viewers for the same show.

“This is not strange behavior at all. It’s much better on the big screen than on TV,” said Ms. Brizius.

The movie’s return to theaters allows many to relive an out-of-this-world experience.

For others, like 6-year-old Conner Watkins, who was checked out of Westminster School by his parents Shelley and Bill, it was a first chance to see the film as it was intended.

“My wife and I saw it 20 years ago, but Conner never saw it on the big screen,” said Mr. Watkins, awaiting the morning viewing. “He wanted to see it, and Shelley and I wanted to see it again.”

But is all the hype and hoopla surrounding a 20-year-old movie with four additional minutes and enhanced special effects worth it?

To Fred Martin, who waited more than an hour for a ticket to the noon screening at Masters 7 Cinemas, it was.

“It was pretty cool. This’ll probably never come out on video,” said the 30-year-old bartender.

Many were buying tickets early Friday for that evening, trying to beat the twilight rush, when a light saber would have come in handy to secure a ticket.

Theater managers anticipate ticket sales to be high throughout the weekend and through the movie’s run in theaters.

“There are probably five movies (released) a year that draw like this,” said Scott Bagwell, manager at Evans 12 Cinemas.

And the space adventure frenzy is expected to continue with the upcoming re-release of the entire Star Wars trilogy. The Empire Strikes Back and Return of the Jedi will also make their returns to the big screen later this month and in March, respectively. 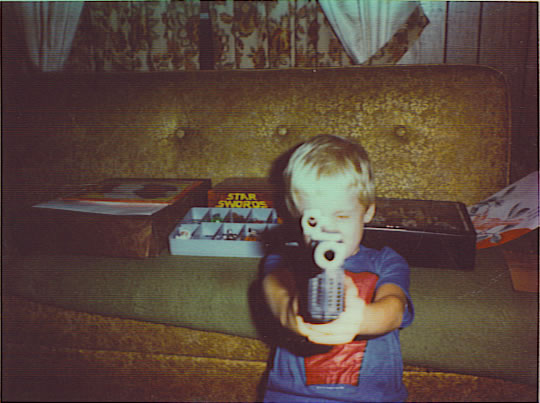